We just recently got in our new half link chains to help dial in your chainstay length that much more and features heat treated pins and thicker side plates that help prevent chain stretch. Get one at your local Volume dealer or bike order shop.

The Hoss and Mastroni have been busy working on the Volume DVD like crazy and have been sitting on some clips to make this Barista bar promo possible.  The Barista is Drew’s ultimate creation of the perfect bends that makes him the original that you see in everything he’s in.  If you or your customers want the perfect 9″ bar and want to be an original just like Drew, pick up a couple here >>

There’s only so many edits that gets me psyched to ride, especially promo edits but this one that Broc and Mastroni put together is on some next level shit.  And this is Broc’s scraps too!  Watch now and then buy a Vessel frame… or two.

Another bangin’ promo for our big March release.  Surprisingly enough, the filming of this edit was cut short due to Chris hitting his head while filming this.  Regardless, Mastroni knew we had enough to put something amazing together still.  The new Maiden fork is as tough as the man himself.  Similar to his last Concord forks with a splash of “new”.  New dropouts and a new aesthetic look make these that much better than what didn’t need that many improvements to begin with.

March is set to be one of the biggest months ever here at 180! The Spring Collections from both Volume and Demolition will be arriving this month and this will be the largest amount of new product arriving at 180 within 1 month, ever. See a full list of the new items arrive after the jump and contact your sales rep to find out about other re-stocked items arriving this month, as well as our March shipping specials. END_OF_DOCUMENT_TOKEN_TO_BE_REPLACED

Don’t think we ever really made an about page or gave our a reason why we all started 180 distribution, so I guess this could be it?  We first started Volume Bikes in 1999 for frames, forks and bars and a year later we brought out Demolition parts for everything else you needed for your bike.
For 10 years we did it all under Volume Bike Corp, until we decided it was time to tackle my longtime pipe dream of doing BMX specific shoes with longtime good friend, Travis Jackson as brand manager.
During this endeavor Volume was going through some weird changes into big bikes and thought it was going to be a Haro or some shit along those lines too.  Somewhere in there we also started a 700c bike parts line called Resist that produced tires and some other small parts. Lets just say my eyes were bigger than my wallet at that time, if that makes sense.  With all these things happening all at once, we also decided to move into a bigger building and call the new house 180 Distribution.
Later that same year after launching Hour (shoe brand), Travis passed away suddenly of a brain aneurism. With Travis at the forefront of the brand and direction we decided to make the hard decision to let it die with him and not move forward with the brand. While I still would love to keep his legacy alive, we didn’t share that same knowhow and direction that he once had for it all.  Not to bring this blog post down with his death but he was a huge part of us being 180 and felt the story should be told on how it all came about.  On a lighter note; The guys in the office swear we have a warehouse ghost that is Travis, that might be another blog post though…
With Volume doing big bikes (fixed and commuter style) a lil’ over a year, we all sat down and realized that we didn’t share that same passion we had for it as BMX and felt it took too much of our time away from our true passion (porn) and cut it all right then and there and sold it all out.
While we did get a bad rap for doing it amongst our BMX piers, I was stoked we did it to get to my prized bike, the 8 sod Generator commuter bike.  Giving my dad his own Generator bike was definitely a highlight in my life and to see him finally be able to ride a bike that Volume made.  Sounds cheesy I know but seeing older guys on our bikes was a whole other thing I thought I’d never see.
With all these things taking a turn, we now got back to Volume and Demolition, the brands that got us where we are.

Can you get a better 3 man team together for a edit! Each one of these guys has a style of their own and their stems are no different. True Top Load, Front Load and Top Load are 3 stems that don’t need a manual to adjust or put on. Looks good, strong as hell and endorsed by these guys. On the shop now!

When all our company posts (Volume/ Demolition) are about riders, tricks and riding, it is a bit refreshing to get back to the parts of what makes up the bike and the machine behind the man… or something like that. If you’ve seen all our social media, you’ve seen that we’re about to drop our biggest/ latest/ greatest spring release. As soon as we get all the goods in stock, we’ll get them inputted into the shop and let you guys know once they’re ready for purchase via our login store.

Does this really mean we’re jumping into the 21 century with a dealer login store… finally?  It’s here and we hope to keep you all (retailers) in the loop about everything we’re up to and what sales are popping.  Please get with your rep about any questions about logging in and or any questions you might have regarding the store, or even on how we can help improve it even more.  It’s always much appreciated.  See you on the “other” side… 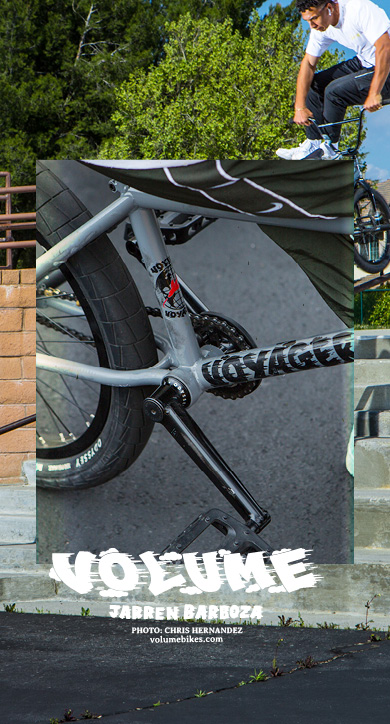